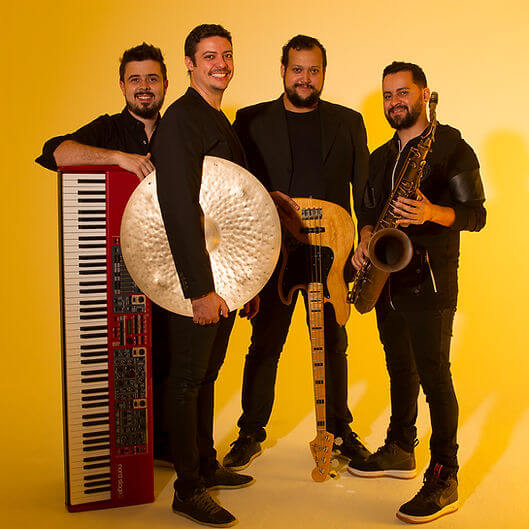 Jazz, funk and fusion – these are the main ingredients of the music presented to their listeners by the artists united by Igor Willcox. Igor is a drummer, but also the author of a large part of the original “pieces” of the formation, which, together with the discovery spirit and spontaneity with which they explore the vast territory of jazz, make them welcome guests at major jazz festivals in South America and Europe, but also on the club scene. We’re talking about Blue Note and Bourbon Street.

In 2019, the musicians made their first major Canadian tour, including all the important jazz clubs such as Yardbird Suite in Edmonton, Frankie’s Jazz in Vancouver, Bucking Jam Palace in Calgary, The Rex in Toronto. One of these evenings became their first album under the name “Live at The Jazz Room”, showing the path that the four musicians have traveled from Brazil and the typical Jazzfusion scene there to more cosmopolitan jazz territories. A path along which they become more and more cohesive and more and more virtuoso. The Canadian publication Jazz World Quest was impressed by “the great range of emotions presented in some wonderful arrangements that give space and opportunity to each of the performers to show their best”. The album includes seven original pieces along with three compositions by three jazz greats – Alan Holdsworth, Wayne Shorter and Lenny White.

The band’s leader Igor Willcox comes from an old musical family and entered the world of jazz under the guidance of his father Paulo Cesar (a conductor and pianist who also plays the vibraphone) and his mother Sonia, who is also a jazz singer. The home where he grew up shaped his musical culture and he became one of Brazil’s leading drummers, played on the same stage with a number of famous jazzmen, released two albums (#1 and New Samba Jazz) receiving great reviews and increasing jazz renown, including in Europe, and naturally leading to the creation of his own formation.

After the constant success in their native Brazil and the aforementioned Canadian tour, invitations from European jazz festivals also came, and 2020 remains in their personal musical history with a composition bearing its (2020) name. They continue to be ever so creative, loving to perform live and close to the audience and this, combined with the high quality of the music they create and present, quite naturally leads them to the Bansko Jazz Festival.