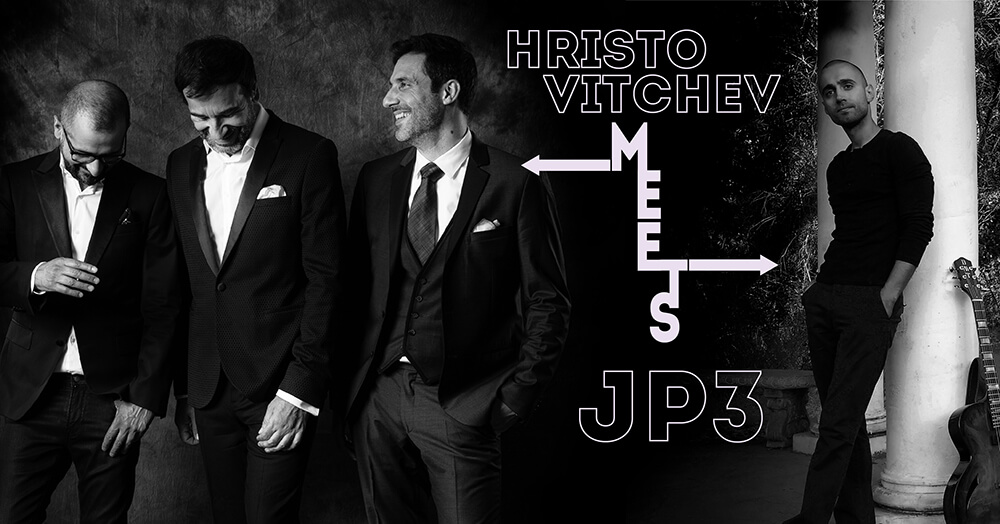 A truly magical musical “sacred act” on stage, exclusively for the Bansko Jazz Festival, the guitarist Hristo Vichev, born in Bulgaria, but now part of the musical life of the San Francisco Bay, and the trio of Zhivko Petrov JP3.

Hristo Vichev has nine solo albums and three more as collaborations in his biography. Three of them have names that are significant for Bulgaria – Songs from Mesembria, Perperikon Style and Rhodopi, but the musical expression in all of them is cosmopolitan and has brought him invitations to extremely prestigious jazz forums in the USA (one of his albums premiered at the Monterey Jazz Fest), Japan, China, Canada.

In whatever formation he performs (from a duo to a quintet), his “elegant and imaginative musicianship impresses,” in the words of Paul Freeman of PopCultureClassics. When his album In Search of Wonders was released, he was compared to Pat Matinee – “Vichev is a talented composer, gifted with the rare talent of creating melodies – a quality that unites him with Pat Matinee, his music is intriguing and multi-layered, as every play tells a story”. The latest album of his quintet was welcomed by TheJazzWeekly as – “Guitarist Hristo Vichev continues to create an impressive and versatile catalog”.

Now, exclusively for jazz fans in Bansko, Hristo Vichev will play with Zhivko Petrov, Dimitar Karamfilov and Dimitar Semov – in other words, JP3, three high-class musicians individually, but as a combination – an honor for any festival. After the release of their first album as JP3, they were invited to play one night with Chick Corea and Bela Fleck at the Sofia Jazz Fest, and the next – It’s a Dream (featuring violinist Vasko Vassilev) became the best-selling digital jazz album in Eastern Europe and lead to an invitation to play at the London Jazz Festival. An album with the Arena Quartet follows, and 2020 comes with Change the Way (album and change of double bass player – Dimitar Karamfilov replaces Veselin Veselinov – Eko), recorded in and deeply connected to Varna.

The leader of the trio, the pianist and composer Zhivko Petrov, is an emblem of contemporary Bulgarian jazz with his nuanced musicianship full of musical metaphors, which covers extremely wide musical territories with ease and finesse.