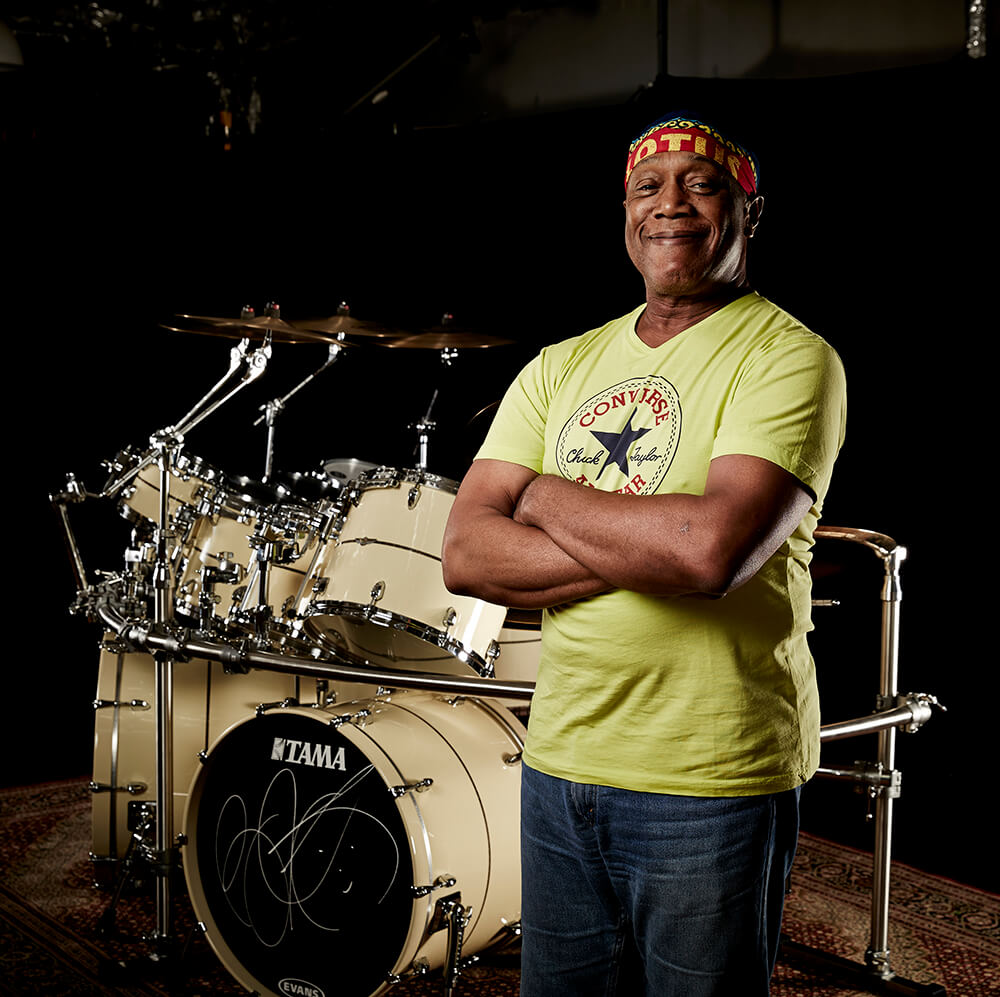 According to many, including Allmusic Critics, Billy Cobham is the best fusion drummer in history.

William (Billy) Cobham was born on May 16, 1944 in Panama. The first years of his life are bright, picturesque and linked with drums, because he was constantly watching and listening to his cousin play them. When he was 3, his family moved to the United States, and to New York. The stage debut of little Billy with the drums was together with his father (at 8 years old). He continued to play more and more in school and in high school. He did his military service in the Navy (as a drummer, of course), then toured the States as part of Horace Silver’s band, simultaneously having musical “run-ins” with Shirley Scott, George Benson and others. For a few months he played in the jazz-rock combo Dreams with the Brecker brothers and guitarist John Abercombe. He then joined Miles Davis’ fusion band (he also took part in some iconic records with Miles, such as “Like-Evil”). He left of his own volition to join the Mahavishnu Orchetrsa, where he had more freedom to explore the frontiers of fusion. Over time, Billy Cobham decided it was time to create his own band, and that’s how Spectrum appeared, and their style was a combination of jazz, rock and funk. In 1974, for their second album, the band was joined again by Abercombe and George Duke, with whom Billy Cobham would often play over the years, including at the Montreux Jazz Festival. In 1975, with the album “Funky Thide of Signs”, Billy finally “settled” in the so-called commercial jazz and decided to work freely, without a permanent formation, mainly as a musician for various projects that he chooses himself. He played with Peter Gabriel, then explored Brazilian jazz for a year; briefly made the acoustic quartet Nordic with three Norwegian musicians…experimenting, going in different directions. In 1998, he helped create the band Jazz is Dead, with which he made versions of the Grateful Dead, but with a jazz twist. It is unmatched in its fusion of jazz and rock.

In 2001, Billy Cobham was named one of the 25 most influential drummers by Modern Drummer magazine. An instrumentalist with an explosive technique, he changed the way drums as a whole participated in the overall musical construction in jazz, an innovator in many ways, bold, visionary, paving the way for many. In the same year, he released Drum’n’Voice 1, in which he returned to the jazz-funk of the 70s, and in 2006 – Drum’n’Voice 2, and in 2009 – the third part of the series. Since 2011, he has his own online academy where he teaches drums. In 1988 he was invited and became part of the Hall of Fame by Classic Drummer Magazine.

He continues to perform extremely actively and is a welcome guest at every major jazz forum in the world. In the months before coming to Bansko, Billy Cobham will play festivals in Switzerland (where he has chosen to live since the late 70s), Italy and Portugal, and in the fall he continues his American tour called the CROSSWINDS Project (like a wink and a return to Billy Cobham’s second album of that name).