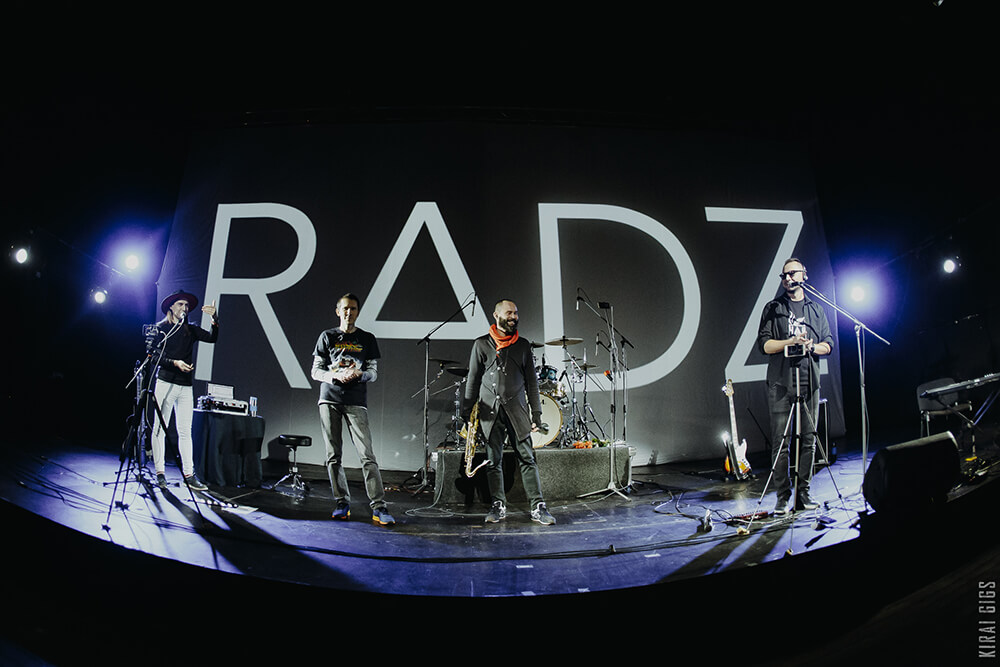 The Radzetsky brothers (Dmytro and Sergiy) are among the leading musicians of Ukraine’s experimental and avant-garde scene. They create and develop their original music project under the name RADZ. Both graduated from the conservatory as classical musicians, won many awards (and international ones) as performers and composers. Their musical journey goes through contemporary music, jazz, rock, avant-garde, electronic music and even Мusique concrete.*

Their motto in music is “Why not?”, behind which lies constant discovery, lack of rigidity and one-act creative thinking, backed by high professionalism and uncompromising quality of stage performance. The unexpected musical turns and words they share with their listeners and their response are a guarantee of their road ever higher. We must add the unique musical instruments that Dmytro and Sergiy Radzetsky are developing. These are 8 and 10 string MIDI RADZ guitars that they play in their concerts.

They also choose great musical collaborators, with whom they manage to surprise the audience again and again. The constant change of their musical appearance also leads to a frequent change in the number of musicians with whom the brothers Dmytro and Sergiy Radzetsky work on their projects – they can be from one to eighty. It is no coincidence that they also created the first Orchestra of Improvisers in Ukraine.

They toured in Germany, Poland, the Czech Republic, Slovakia, Great Britain, the Netherlands, Israel and the USA.

They have played with a number of famous musicians and formations from different fields of music, among them Ed Mann and Denny Walley of the Frank Zappa Band, Christopher Garcia of The Grandmothers of Invention, the Liverpool band (also performing Zappa’s music) Muffin Men, the British progressive rock band King Crimson, with Nazareth vocalist Dan McCafferty, with Graham Bonet (Michael Schenker Group, Alcatrazz) to Vyacheslav Ganelin and Vladimir Tarasov of the jazz trio GTC and Fried Dan of Ensemble Modern

*Musique concrete is a style created by the French musician, musicologist, writer and acoustician Pierre Henri Schaeffer (1910 – 1995). Recorded sounds of various nature are used, which are modified by the application of various effects and editing.